Everything you need to know to get started.

First things first, you'll need to download PteroBill. You can find a download link in your client area after your order has been completed. Once you download the zip and extract it you'll find installation instructions in the INSTALL.txt file.

Once you've installed the module you're ready to start configuring your servers and products. If you have used the Pterodactyl-WHMCS module before then much of this process will be familiar, however products cannot be directly switched from Pterodactyl-WHMCS to PteroBill. If you have problems make sure you followed the setup instructions carefully, because there are important differences between the two.

In order to create Pterodactyl servers you'll need to create a WHMCS server.

Under Setup -> Products/Services -> Servers create a server.
The Hostname field should be the hostname of your Pterodactyl panel, example: panel.pterobill.com.
At the bottom under Server Details select PteroBill as the Module.
The Username field can be left blank.

In a separate window login to your Pterodactyl panel. You'll need to create an Application API with the settings shown on the right.

PteroBill requires different permissions than Pterodactyl-WHMCS, so make sure to create a new key if you're migrating.

Once you have the key created enter it in the Password field in the WHMCS server config. 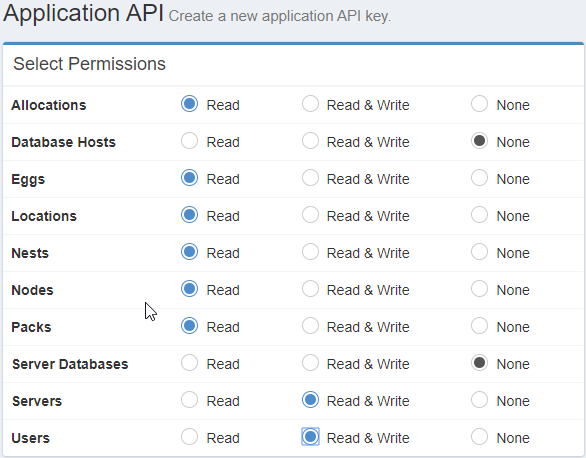 PteroBill has an optional feature to add buttons in the Client Area that allows customers to reboot their servers without leaving WHMCS. If you want to enable this feature you'll also need to add an Account API key. This key must be made by a Pterodactyl Admin account for it to work.

If you're using SSL make sure to check the Secure checkbox for SSL Mode.

PteroBill's time to shine is in the Product Configuration. It's here you'll configure the AutoAllocator that ensures you'll never have to manually activate a server again. Below you'll find a screenshot of the Module Settings page followed by a description of each field and how it can be configured.

Each field has a Help link next to it that you can hover over for a short description about that field. Options with blue text can be clicked to open a page with more details.

Module Name - Select PteroBill from the dropdown for the module name. If you don't see it be sure you followed the setup instructions in INSTALL.txt.

Server Group - Select the Server Group you configured in the Server Configuration step. If this isn't selected the Location dropdown won't be populated and none of your setups will work, so make sure it's set!

Server Name - The default name the server gets installed with. The user will see this name in their panel, so it often makes sense to name it after the Product. The user can update this later.

Location - This dropdown automatically populates your available locations from the panel. Select the default location to deploy this product to.

Memory (MB) - The maximum memory that this server will be able to consume. 0 for unlimited.

Disk (MB) - The maximum disk space that this server will be able to consume. 0 for unlimited.

Swap (MB) - The maximum disk space that this server will be able to use for swap space if it runs out of memory. 0 to disable swap, and -1 for unlimite swap space.

IO Weight - The IO Weight is the priority given to this server for disk access. Must be a value between 10 and 1000. To treat all servers leave this at the default of 500. For a detailed description of how IO Weight works click here.

Port Array - Port Array tells the Allocator which ports to assign this server. It must be valid JSON and it must include a value for SERVER_PORT. SERVER_PORT will be used as the default allocation, and any other entries will be added as additional allocations. For additional ports use "NONE" to just allocate the port, or a variable name such as "RCON_PORT" to override the Egg variables.

If the ports assigned in the Port Array are not available the Auto Allocator will keep searching for available allocations until it finds a match.

Create Allocations - This feature is not currently implemented. Once complete it will let PteroBill create allocations so you don't have to manually add them.

Dedicated IP - Assigns a true Dedicated IP, a feature not available in Pterodactyl. Tracks IPs that have been assigned as dedicated so future servers don't get assigned to that IP.

Nest - This dropdown automatically populates your available nests from the panel. Select the nest containing the egg for this product.

Egg ID - Egg ID from the Panel. Due to WHMCS limitations this isn't a dropdown, but hopefully in the future it can be.

Pack - Pack ID from the Panel.

Database Limit - Number of databases this server is allowed to create. 0 for none, leave blank for unlimited.

AutoAllocator Increment - Number of ports the Allocator increases by when searching. Defaults to 1, but can be increased if desired.

PteroBill exports some data from Pterodactyl to WHMCS that can be used in your client area product details template.

For example, to create a button that links to the server on the Pterodactyl panel use the following HTML:

You can use configurable options or custom fields to override certain values when your customer is placing an order. You can use this to let users pay for extra memory, faster cpus, or additional backups.

Below is a list of the variable names you can override.

If you are having trouble with your PteroBill setup you can file a ticket or join us on Discord for assistance.

Let us take care of the details.